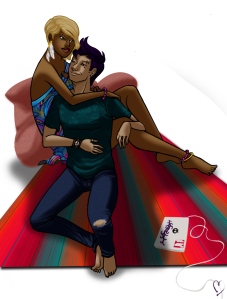 These two are just too cute together. Originally I wanted them standing up but… I ran out of room on the paper

So I tried out a bit of a perspective instead. I also crapped out on the couch and background and put them on a rug instead, added Darkly’s computer and there you have it. Sonya is pretty much the only thing that can pull him away from his devices