“Color you peach and black – color me taken a back. BABY!”

Sonya and Darkly cause I haven’t drawn them together in a long time. And I love illustrating how different they are from each other. Especially when it comes to their ‘club’ look. A lot of people don’t think of Darkly as a big dancer but he damn sure isn’t gonna let Sonya dance alone. Plus all he really has to do is stand there while she does her thing. This was originally going to be them in a park or something until I remembered the video to U Got the Look is actually a stage performance made to look like a club. I gave Darkly a summer hair cut cause it’s friggin hot here!

U Got the Look is yet another Prince Song 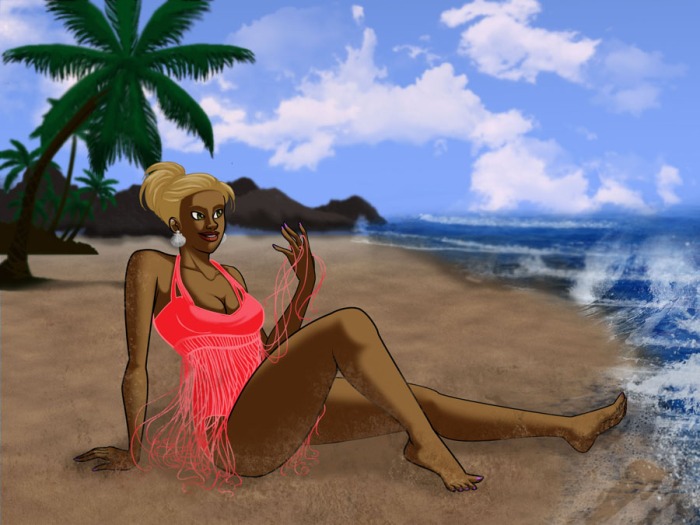 Happy 4th of July! Finally finished this and now I’m gonna go eat. Enjoy this random drawing of Sonya on a private beach

Guess what “Play in the Sunshine” is… a Prince Song!
Buy Illegal Tender on Gumroad!!

This isn’t the whole page just the panels with the most improvement. I’m almost done!! Issue #2 is looking as good as I always wanted it to. But this page (like many others) needed some work. The first run was never as intense as I wanted it to be. It came off too… cute – like Emil and Erol were play fighting. Well now the pictures match the words of this page and I love it! It’s amazing what a slight change in posture will do to improve the intensity of a scene. I always though that last frame in the original made Emil look goofy instead of angry. I need to fix the shading on Erol’s hair in the first panel but other than that…

I never realized just how terrifying Emil must actually look to other people. He’s got extreme heterochromia and his eyes slant which make them look mean without even trying. But on top of that he’s got those huge canines and I don’t care who you are – when sharp teeth are bared it’s scary. So yes, you don’t want him pissed off at you. Add to that his skills you get one bad mofo! I love Erol’s transition from ‘vengeful’ to ‘scared’ – if anyone remembers this is after Alpha shows up for the first time and Erol wants to kill him but Emil pretty much tells him ‘it ain’t that easy’. 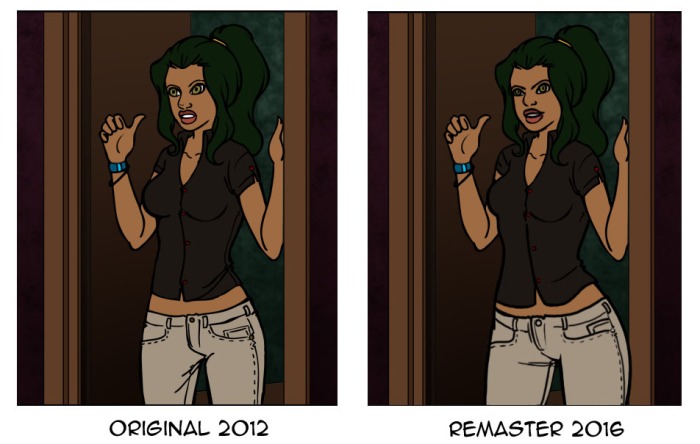 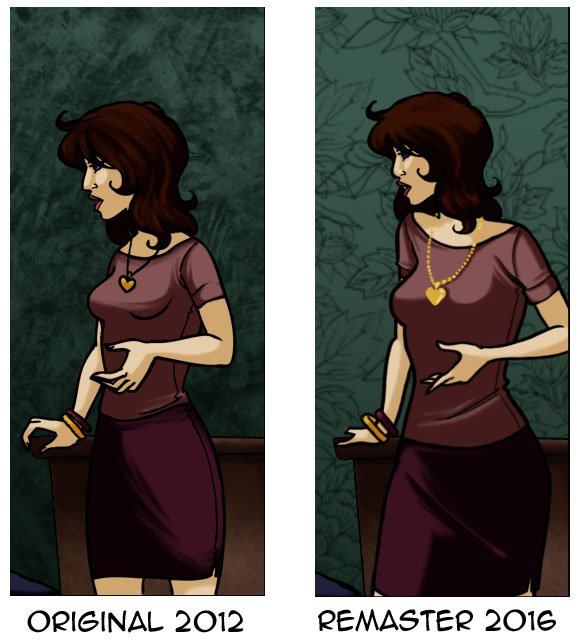 Remaster is looking good! Issue #2 will be available summer 2016!

Countdown has begun! Hope to see you there!

Illegal Tender will be at Artist alley table #4!

So yes if Kiddo is the most beautiful girl in the world stands to reason her boyfriend is ‘the beautiful one’. Sad thing is Emil doesn’t think he’s beautiful or even good looking. His entire childhood his father would tell him he was ugly because of his heterochromia. In fact Emil suffered abuse for years simply because he didn’t look normal. Yeah, his dad was a jerk – he still refers to Emil as ‘a demon’.

It’s taken him a few years to realize people might actually find him attractive – compared to Darkly (who I consider very handsome) Emil falls under the category of ‘pretty boy’. He has slanted eyes, long lashes, high cheek bones and head full of silky hair. Emil in turn would say that he’s ‘too pale’ has a bump in his nose, his teeth are scary, etc. It’s not that he’s fishing for compliments he just doesn’t think he’s good looking. Poor baby.

Haven’t drawn Emil by himself in over a year so yes, this happened 🙂

“The reason that God made a girl.”

Well at least Emil would think so. Still on my Prince kick and I couldn’t think of anyone else who fit this song better. It’s so light and hopeful.

Alternate title was “For Erol”. I was originally going to put Erol’s name on Luc’s guitar but this particular guitar is not the one Luc has in the comic. It’s based off a MTV unplugged performance by Prince in which he plays a purple acoustic guitar (you can still see it in my twitter feed on my main page). I DREW LUC!! If you caught the comic before I took it down for revamping this blue haired beauty is Luc Jones – Erol’s future husband He’s a secondary character in I.T. and I so rarely get the time to draw them. When I originally created Luc I knew I wanted him to be a musician with a very angelic voice and now his songs are going to be mostly about how much he loves Erol – with a bunch of dirty verses about his red haired muse. Although most people won’t realize he’s singing about another boy

People who actually know about guitars and music please don’t kill me – I actually have no idea about it at all. Not sure what kind of guitar he’ll actually play in the comic but I’m open to suggestions.

Still on my Prince trip – ‘For You’ was his first album